This was originally on military intervention but sadly it is apparent our military has been compromised.  We would not fare well in a war with China or Russia. The only way we could prevail is if the conflict was nuclear but we all know in a nuclear conflict there are no winners. China is on the verge of replacing us as the global economic and military superpower. If that happens our lives will be radically changed for the worse. The Democrats and radical American hating left are doing everything in their power to do as much damage to the US as possible. The “fifth columnists” in the United States have become so entrenched they have weakened the military continuing what the President Obama started. The military has become an organization of social justice warriors. The recent defeat in Afghanistan and the collusion with the Chinese by our Chairman of the Joint Chiefs of Staff show the enemy is now in charge of them. President Trump tried to reverse the decline of the military by removing the “straight jacket’ placed on them but the jacket was put back on by Biden. We have been betrayed from within. Below is a cartoon shortly after President Trump took office. Trump is handing the key  to the boot on the plane’s wheel to the general and saying “Here is the key.” The tag on the boot says Obama. It says a great deal. The fact the military has betrayed Trump’s trust and faith in them and their purpose which is the of defense of America shows their loyalties. 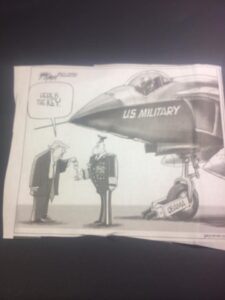 China focuses on their objective while we focus on “wokeness” and identity politics. We appoint people to positions of power to fill a quota not because of their qualifications. That only works until the artificial bubble of protection our technology has given us exists. That bubble is being weakened by our declining intelligence, education and morality levels and our feminizing of society. Russia and China are doing the opposite. The lowering standards necessary for our security is suicide. As they say on Star Trek “shields failing.” No one should have any problem with female soldiers. I am a Star Trek and Star Wars fan and believe women can be excellent soldiers but don’t lower the standards. A large percentage of deaths in combat occur with the two combatants at very close proximity to each other. The trans movement with trans men saying they are women fighting actual women in the ring should show the difference between the two sexes. It is a no brainer proving those advocating for lowering training standards have no brains.  Captured female soldiers will not fare well as prisoners of war. If you think the people the military and security agencies are recruiting will stand up against the Chinese or Russians you are mentally deficient. We better wake up or we will be owned by the Chinese or Russians. Whether you like Tucker Carlson or not two plus two equals four regardless of what political correctness and “wokeness” tells you. Those that don’t like Tucker can’t refute his claims but can only emotionally deny them.

Here is Tucker on the lowering of military standards. Would you lower the standards for a female surgeon? A female pilot?

The CIA is trying to prove they are woke. On a global stage woke it is your condition just before the funeral home gets your corpse.

I have removed the original essay to do some serious evaluations and re-evaluations. There have been some disturbing “happenings” in the military as of late that raise concerns. Either way the essay had some information that is essential to whatever the ultimate path we take. I will be redoing it and will post it soon.